June 12, 2009
Our recent trip to Turkey and France included 6 flights across the US, Germany, Turkey and France. As my husband and I were carrying our luggage and baby through the Frankfurt airport, we reflected about how happy we were that our 16-month old toddler was usually so good with flying. Especially at this age, he was so excited about vehicles, and airplanes in particular, that he was eager to fly. He loved airplanes so much, that he had to blow several kisses to one of our planes to say "good bye" after we got off. (At another time, he also threw a tantrum as he wanted to run to the plane even though the gates hadn't been opened yet... fortunately, they opened soon and we ended up the first ones to "rush" to the plane).
Another thought that occurred to us was that Daniel would probably become a United Airlines Premier member before he turned 2: two annual return trips to Europe and a few domestic flights would make him a frequent flyer baby. Overall, since birth Daniel has spent over 1% of his life in planes or airports. This is more time than he has spent taking baths!

Through these experiences, we have been fortunate to have a cooperative baby most of the time. He never seemed to complain about the altitude changes or any other discomforts related with flying. He followed his usual sleep schedule during night flights, which was great.
The most difficult time for flying was around the time he started walking (10-12 months). It was very hard to keep him on the same seat for so long. We ended up having to walk up and down the aisle of the plane (We made a lot of friends in these circumstances, though) or letting him climb up and down his seat. Now that he is older, Daniel likes to read books and can manage to remain seated in one place for a longer period of time. This helps a lot. Judging from watching 2-year old kids around us, things should get even easier from there. He should soon be able to entertain himself at his seat.

Before walking, our baby was a really good traveler too: he slept a lot and he didn't need to move much. The bassinets for infants are not always much help, though. On one flight, we had one bassinet that had to lie on the floor. We were constantly worried that we would step on it, or that Daniel was too cold.
3-month old Daniel in the bassinet on the floor 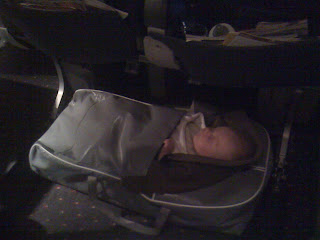 For our international flights, we have recently been booking a separate seat for our baby and bringing his baby car seat with us. We think this helps a lot, as it gives him room to stand/climb, and also a familiar and comfortable place to sleep. It's more expensive, but it's definitely worth the price.
Another trick was to bring toys Daniel had never seen before. Before each trip, we have replenished our "small toy" collection, so that Daniel's curiosity stays fresh. This has proven to be very beneficial: Small vehicles or animals were a hit. That said, we have found that we didn't need to bring much after all. Between the interactions with the other passengers (peek-a-boo does wonders), reading through the plane's magazines, and watching the activity at the airport through the window, we found quite a few things to do on the plane. Overall, we still manage to travel with hand-luggage only.

As I have browsed blogs in search of parenting information, I have noticed that a majority of soon-to-be or new parents are afraid to travel with babies. Since our families are in Europe, we haven't had the choice: we put our baby on his first intercontinental flight at 3 months. He did great, and we have been traveling with him ever since.