January 09, 2010
Over the holidays, we visited our families in France and Germany. All of us, including Daniel, were really looking forward to the break and to catching up with everyone. For the first time, Daniel also could somewhat comprehend what was going on. He had been asking for 2 months when we would be visiting Oma and Opa, and he understood the need to travel far to see them. He was also involved in the packing and had his very own backpack to carry.
The trip went well. Despite a 3-hour delay in the airport, Daniel did great: checking the activity in the airport, riding the shuttle between terminals, etc... He also didn't have any problem walking all the way in the airports (we didn't have the baby backpack this time), despite the fact that we came in at the furthest-away gate in Frankfurt after a 10-hour flight.
Once we arrived, he was very excited to see Oma and Opa. He had been anticipating the hugs he would give them for so long, and he wasn't disappointed. It was so cute! Daniel did great meeting with everyone, grand-parents, uncles and aunts, cousins. He quickly started to ask for his cousins, even when they were not with us. Great to see he was really interested in playing with them.

Daniel didn't seem to be bothered with the fact that he had to switch his primary language first from English to German and then mid-way again, when we went from Germany to France. Daniel's language skills actually improved a lot during our vacation. He had just started to make "complex" sentences before we left. Now, armed with more vocabulary, the experience of hearing various people speak these languages all day, and a better understanding of the world, he tells full stories, with a beginning and an end, and logical elements to tie the pieces together. We can really have discussions with him now and it's a lot of fun. He also switches languages between me and my husband correctly. He now knows most words in all 3 languages, which helps a lot...

The one piece that is still difficult for Daniel is the use of determiners, such as "the", "un/une", "der/die/das", etc... Daniel's sentences are a combination of adjectives, verbs, nouns and some prepositions, but no determiners. Daniel tried once to use some with me, but I think the experience scared him. I was dressing him and putting his socks and slippers on. He tried to describe the sock I had with "une chaussette". This was correct, and I was happy he had said more than just "chaussette". However, when moving on to his slippers, he said "une chausson", using the same logic he had just used. But in this case, it was wrong, since chausson is masculine. I ended up correcting him, and I think he must have thought that this whole determiner concept is too hard. Especially when thinking about it, he will have to learn 3 genders in German as well... Probably too complex for someone who is trying to communicate as effectively as possible. Since we understand him without him using the determinants, he probably decided to use his energy learning new words instead... Daniel hasn't tried to use new determiners since then!

Overall, it was a good trip. We ended up doing a lot: going to the Christmas market and carousel, to the zoo, to the circus (a first for Daniel), pony riding, visiting a farm, a day trip to Paris in train (also a first), and obviously eating and sleeping a lot!
Daniel enjoying the carousel in Paris 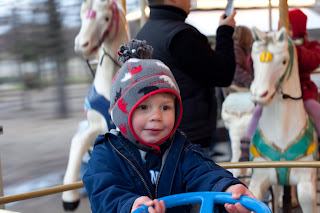 Jetlag was a little bit of an issue (as expected), and for some reason, Daniel had a little bit of a hard time in France. He didn't seem to be as comfortable there and he cried a lot, especially I wasn't in the room. He usually has no problems exploring new worlds without me, and he didn't seem to mind me being gone when we were in Germany. Not sure what happened. It was probably the accumulation of a lot of new experiences at once - maybe he had had too much and couldn't handle the new challenge by himself? Maybe he felt overwhelmed by the number of new people around him at the same time, especially because he hadn't seem them in a very long time? Hopefully as he gets older, he will have an easier time with new environments and this won't be a recurring issue.

Would love to get people thoughts on how to address jetlag with kids, though. I expect that this will continue to be an issue for many more years, and am wondering when kids are ready to understand what it is. 6 days after we came back, Daniel is still waking up around 4-5am, expecting to start his day. At his age (almost 2), we can't really explain to him what he is going through. We just keep telling him to go back to bed, and not responding to his calls for breakfast. It's hard on him and us. Is there a better way to help?