August 09, 2011
Our latest vacation led us to Greenland, a destination we hadn't necessarily thought about until this year, but one that made sense at some point, given that we regularly fly over it on our way to Europe. Since we had a wedding to attend in France, we looked into other countries we could visit on our way back and Greenland became a good candidate. It's actually not an obvious choice for a couple of reasons: the logistics is very complex (it took us several weeks to finalize our itinerary). Connections to Greenland had to go through Iceland so it was definitely more than just a "stop over" on our way back, oh, and each destination within Greenland can only be reached through planes. It's not known for being the most kids friendly. The weather is, well, cold and rainy most of the time, and mosquitoes are supposed to be an issue (we didn't get too bothered by them). But it turned out to be a good vacation nevertheless. We were very lucky and got a great weather except for the first day (in a sense even better than what we had gotten in France a few days earlier). The views of the glaciers and icebergs are magnificent. The sizes are so big, it's hard to imagine until you see them in real life. And I could definitely have gotten used to having breakfast in front of a sea covered by icebergs, big and small, every day. 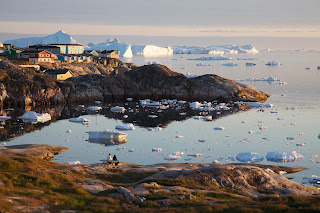 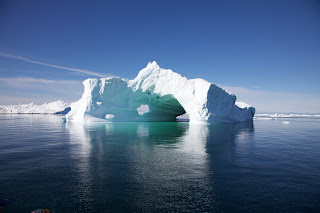 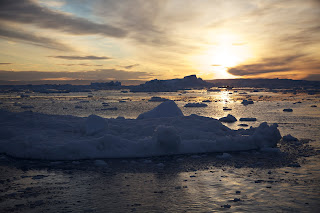 We went to 3 places: Nuuk (the capital), Kangerlussuaq (gateway to Russell glacier and home to the biggest muskox population) and Ilulissat (known for its impressive icebergs). We used a variety of means to visit these places: a lot of hiking, very bumpy jeep tour, boat tours and a helicopter tour. I was positively surprised about how easy the logistics of our trip turned out to be. The connections with Air Greenland were efficient and easy (little to no passport control or security, flight departing ahead of schedule). Yes, American airlines seem very unattractive in comparison! The quality of the food and the hotels was very strong, definitely above my expectations (specific Greenland hotel and restaurant reviews here). We only stayed there for a week, but I feel that we were able to see a lot. And given how small the area is that isn't covered with snow, there is only so much to see in each place. We were lucky to see the Russell glacier calve quite a bit during the couple of hours we spent there. And we saw the most amazing iceberg collapse off the shore of Ilulissat. These were very unusual events and we just got lucky to catch them. So, we can say that it was a successful trip.
Russell Glacier calving 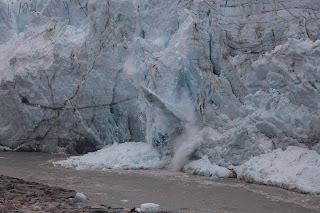 Sea off Ilulissat, before the iceberg collapse 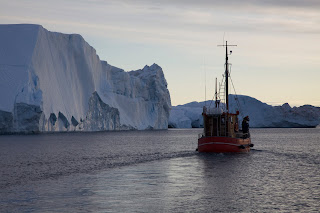 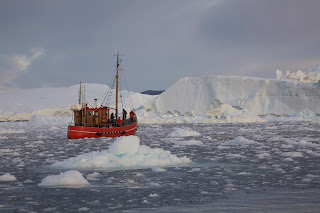 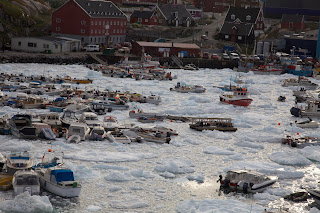 For the most part, the kids did well in Greenland. It wasn't the relaxing vacation we had had in Jamaica and not quite as kid-friendly as Kapikiri, Turkey. But I think they had a good time, and definitely a lot of memories. Daniel will talk about the helicopter flight for a long time! So, overall a pretty successful trip. I think it was partly luck, but also Greenland being easier to travel than expected. I am glad we did it!