January 10, 2014
We spent a week of our Christmas holidays (and a few days due to unexpected flight cancellations!) in the Yucatan Peninsula in Mexico. We had a great time, although we encountered some lousy weather toward the end of our trip. It was one of these trips where we had to improvise! As typical for us, we moved around a few times during the week and got to enjoy different sights of the Yucatan Peninsula.
We started in Cancun, where we arrived on a late afternoon. We spent the night at a standard beach hotel called Hotel Calypso which was OK for one night. It had the benefit of being easy access to a local Mexican restaurant, nice for late dinner. In the next morning, after waking up early because of jetlag, we were able to enjoy a quick walk to the beach and a swim in the hotel pool. Kids were happy to test their new snorkel gear in preparation for the cenotes.
By mid-day, we made our way to Tulum. We had booked late in the season, so we couldn't find good accommodation in the beach hotels, but we stayed at a nice remote small hotel called Posada Yum Kim.We liked the traditional accommodations and the fact that we were not surrounded by tourists. We had to walk to town to get dinner and mingle with the locals.
On the next day, our sightseeing really started. We first visited the unavoidable site of Tulum. The location is amazing, and that's what makes it so popular. However, we didn't enjoy it as much because it was so crowded. That afternoon, we went to visit Cenote Dos Ojos and it was amazing. Cenotes are these underground water caves that offer a refreshing swim and a fun experience for the kids. What a great way to escape the crowds. 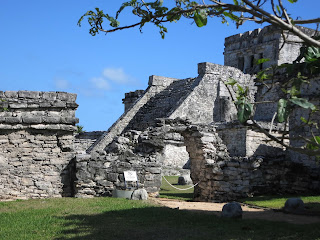 Rare view of Tulum without tourists 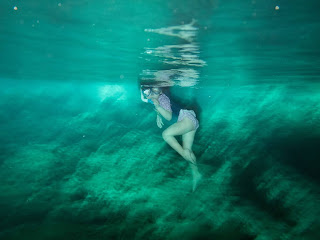 3-year old swimming in the cenote 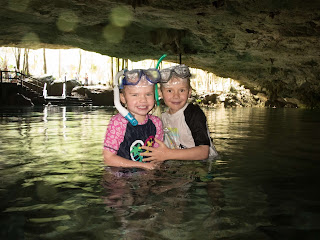 Fun in the cenote
Our biggest adventure day was the following day. We had a packed schedule, visiting the cenote complex of Tamcah-Ha, Choo-Ha and Multum-Ha, the Mayan site of Coba and the well known site off Chichen Itza (which we squeezed in last minute in our program by sunset but ended up visiting with very few tourists!). With the New Year's holiday approaching, we had wanted to be safe and made sure to visit these places while they were open. We enjoyed the entire day. The cenotes were amazing. Coba stood out with its tall pyramids and Chichen Itza just looked so perfect. A nice way to learn about the Mayan history in a concentrated way. 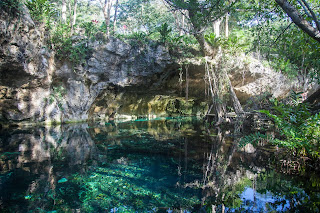 Entrance of the cenote 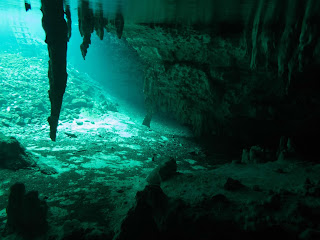 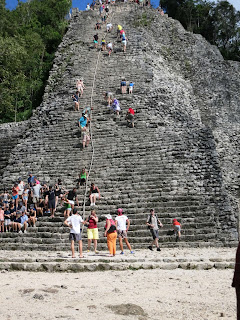 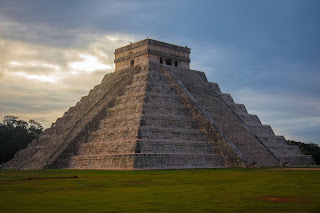 Majestic Chichen Itza
We finished the evening at the amazing Lodge at Chicken Itza. In hindsight, we regretted spending only a night in this hotel. It is an amazing hotel. The grounds are beautiful; it's surrounded by nature (we heard frogs all night long). The pool is wonderful and the food is fantastic. While we only stayed one night, we made the best of it by enjoying their New Year's Eve party. It was wonderful, even though we were exhausted by then. We had an amazing time! 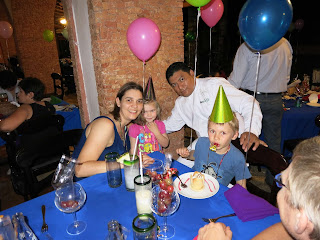 New Year's Eve party!
The next morning, having already visited Chichen Itza, we ended up using the time to visit a less popular but nevertheless interesting site called Ek Balam. Visiting it on New Year's Day, we pretty much had the site for ourselves. We thought it was definitely worth the visit. We were allowed to come close (and climb) on most pyramids (not like on other sites), and we found some interesting sculptures. 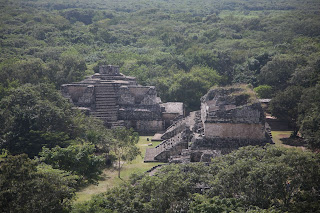 Ek Balam from the top of a pyramid 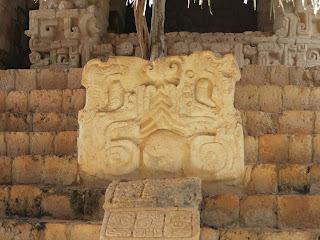 Sculpture
After a lunch at Valladolid, visiting the city center which represents a more recent history of Mexico, we headed back to the sea shore, with our destination on Isla Mujeres. 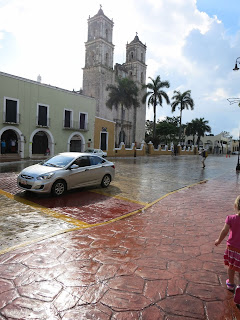 Valladolid City Center
We were planning on spending the last 2 days of our trip relaxing by the beach and enjoying the beach town. However, the weather had a different plan. We had about half a day of amazing beach time before rain settled down on the island, rendering the beach unattractive. With 3 young kids in tow, the prospect of being stuck in a hotel room for 2 days didn't appeal us much (remember this when you read the end of the story). We quickly changed our plans, were able to organize a rental car and spent the afternoon doing a tour of the island in the rain. We stopped by a turtle aquarium, which was a nice break and actually quite informational for the kids. 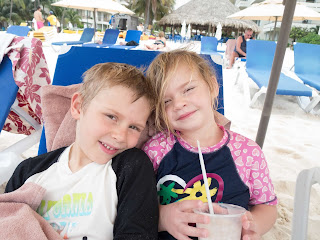 Short taste of the beach before the rain 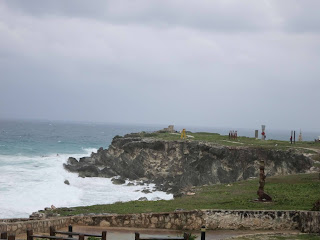 The Southern tip of Isla Mujeres on a stormy day 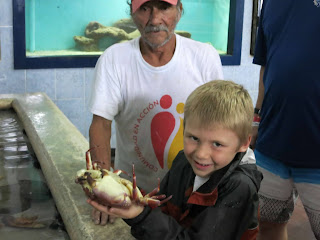 Learning about marine biology at the turtle center
On our final full day, the rain still hadn't stopped, so we ended up spending the day in Cancun, visiting the main aquarium, and enjoying a bumpy boat right from and to Isla Mujeres. 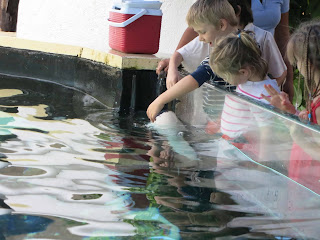 At the Cancun aquarium
By night time, the rain finally stopped and we enjoyed a final nice dinner on the Mexican seashore. We were glad we had been able to make the best out of the rain and get some good memories along the way despite the changes of plans.
Little did we know that this wouldn't be the end of our adventure. As we got up the next morning, we found out that our flight out of Cancun had been cancelled, and the next best opportunity for us to get home would be 2 days later. Additionally, the rain had started again, so the delay of our return was not a welcome news. We ended up leaving Isla Mujeres and returning to Cancun proper for 2 days, where we tried to go out occasionally (tried to squeeze in pool time with the kids in the rain). But having to keep up with work and with limited options outdoor, we ended up spending a lot more time than we had planned watching cartoons in Spanish on TV. I guess we could argue this was educational. I am not sure I would ever say this again, but for once, we were glad when it was finally time to leave paradise.
That said, we can definitely say we would do it again for all the good memories.