July 22, 2014
This is part 2 of our epic trip from Morocco to Barcelona via Gibraltar and Andalusia.
After 3 busy days, trekking through Morocco and Gibraltar our next destination was Granada, which did not disappoint. We were so happy to enjoy the wonderful Spanish tapas and the ice cream shops. We let the kids enjoy several ice creams on that day for all the great traveling and walking they had done (although they had all napped in the car on the way to Granada; we found during the trip that car rides were nice breaks for them). We spent the first evening just enjoying walking around the city.
The next morning, we had tickets to go visit the Alhambra (book tickets in advance!). It was busy but the ticket scheduled helped a lot. We enjoyed the tour and the kids had fun observing all the decorations. By the afternoon, we were ready to move to our next destination, Cordoba. When we arrived in Cordoba, we all felt exhausted (parents didn't get to nap in the car!) and it was really hot, so we decided to take it easy and take one of these open bus tours to visit the city. It was nice to get a sense of the map of the city and seeing the buildings from a tall bus as opposed to the ground. By night time, the temperatures were still very hot and the highlight was that the kids found water fountains to play in after dinner. The fountains attracted a lot of crowds and it felt like a big party. The kids loved it more than visiting all castles! 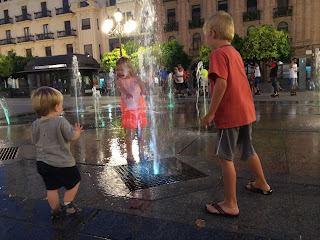 Best part of the day! 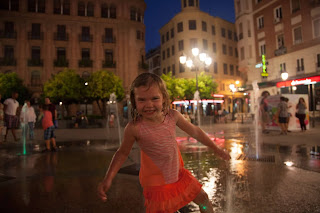 Soaked!
In the next morning, we visited Cordoba on foot. It was nice to get lost in the little streets leading to the main churches and the Alcazar. We all enjoyed the visit and before we knew it, it was our last lunch in Cordoba (tapas again!). We then made our way to our last Andalusia destination: Sevilla. We hadn't planned very much program for that afternoon, like we had done in prior days. But we got somehow carried away when we realized it was so much fun walking in the streets (and enjoying a few too many ice creams along the way, which kept us going). We ended up visiting the Alcazar that same evening and doing a nice tour of the city in a horse carriage. We continued on until dinner, and enjoyed a nice sunset over the Guadalquivir, the river that flows across Sevilla. By now, Gibraltar felt like a long time ago, even though it had only been 3 days. 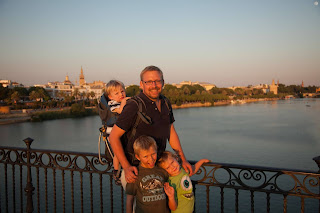 Sunset in Sevilla, at the end of a fun week of sightseeing
This ended up being our last activity in Sevilla. The next morning we slept in, enjoyed a leisurely breakfast in a local courtyard (nothing fancy, but the food was once again amazing), took our time packing, and headed to the airport for our final destination, Barcelona. It wasn't until then that we realized how much we had packed in a week of travel. We had all these great memories, but were quite exhausted. By the time we arrived in Barcelona and met with family (they had arrived a few hours before us and had had a short flight), the cousins were eager to go to the pool. While our kids usually take advantage of any opportunity to swim, the 4-year old stayed bundled on a lounge chair the entire time. That's when we knew the 150km walked on foot in the last week had been enough for her. No wonder.
Thankfully, the program in Barcelona has been meant to be pretty light, to allow for reconnecting with family. We had a few planned group dinners, and besides that, we spent a lot of time enjoying the hotel and the beach nearby. We ventured out to visit the aquarium, which was a hit with the kids, and we took the funicular to visit the hills and miradors nearby. By then, the kids had had the chance to recover somewhat.
We left Barcelona by train to visit family in Paris for a few days. All in all it had been a busy trip and we ended up staying home for most of the following 3 days, as none of us had much energy to do anything (yes, we ended up passing on some of the must-do Paris attractions but we still got the Eiffel Tower where the 6-year old lost his tooth at the very top of the tower).
But we had had the chance to visit the places we had dreamed of for so long and we hope that the kids will still remember some of them for a long time. Who can forget riding on camels, hanging out with wild monkeys at the top of a massive rock after hiking to the top, eating tons of yummy ice cream, or losing a tooth at the top of Paris?
Here are the final stats:
4 countries, 2 continents
11 hotels
1800 km by train
1800 km by car
35 km by boat
150 km on foot
1 km on camel
Countless servings of ice cream, jamon iberico and croissants
3 amazing explorers-in-the-making
1 happy family
Would we do it again? Oh, yay (and next time, kids would be bigger, that's a plus). Where do I sign up?