September 25, 2017
We had been remembering fondly our safari in Tanzania in 2005, and had just been talking about going back there with the kids, discussing when our youngest would be old enough to enjoy a safari. Right at that moment, the opportunity came to us in the form of an auction, where we won a 5-day stay at a beautiful safari lodge in South Africa. The deal was sealed: we were going to go to South Africa, with a 9, 7 and 4 years old. Gulp!
We figured that, if we wanted to make it worth it flying around the world, we should stay in South Africa for longer than just 5 days of Safari, so we included a few stops along the way and an extension of our trip into Zimbabwe (Victoria Falls), which was a very nice surprise and exceeded our expectations.
The below is our itinerary and experience. A few tips for anyone interested in visiting South Africa.
1. Summer in the Northern Hemisphere means winter in South Africa. While this wasn't an issue for the safari portion of the trip (the days were short and it was somewhat cold in the mornings/evenings during safari time), it impacted our visit of Cape Town. We had to cancel most of the program we had planned for due to bad weather concerns.
2. Safaris don't allow open roofs for kids under 6. The covered vans made it harder to see and enjoy the safari.
3. The luxury lodges are typically not in the National Parks themselves, but in private reserves. As a matter of fact, the lodge we were at was around Kruger, but not in Kruger itself. There are pros and cons to the luxury lodges:
Pros: High comfort and amazing experience at the lodge, the wildlife population is very well managed on the private reserve, the guides know the animals' habits very well and you have a high chance to see the Big 5. There is also less restrictions as to where the safari vehicles are allowed to go, so you can more easily go after animals even if they move away from the main road.
For us, we were able to see 3 rhinos within a few hours of each other.... but we noticed after 2 days that we had only seen 1 zebra. This seemed out of balance. Which brings me to the Cons.
Cons: The reserve doesn't represent the actual variety of wild life in the national park. It also didn't have the plains full of animal herds that are expected in safaris (and that we had enjoyed visiting so much in Tanzania). After a few days, we definitely felt that we were missing the real safari experience. So we left the private reserve early to go to a -not so beautiful- lodge in the middle of Kruger National Park. But the lodge made up for the lack of luxury by being in the right location.
Itinerary
Days 1-3: We spent in Cape Town, where we were planning on taking the cable car to see thee tabletop and visiting Mandela's prison. Because of weather, both the cable car and the boat to go to Robben Island had to close. We ended up visiting the aquarium instead (nice, but not so unique) and doing a bus tour of the city.
One of our best experiences was visiting the Cape of Good Hope and seeing the penguins that live on the shore of South Africa. While it was windy and cold, it was fun to be in the unique geographic location. 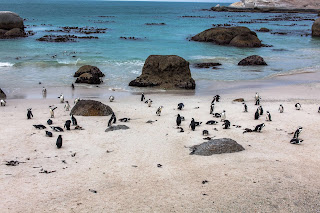 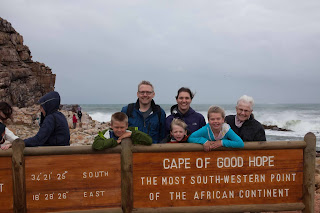 Windy Cape of Good Hope
On our last day, as the weather was improving, we did a tour of the local region, visiting cute local towns, wineries, a goat farm, a chocolate factory, and an animal rescue center where we got to met cheetahs! This was exciting. 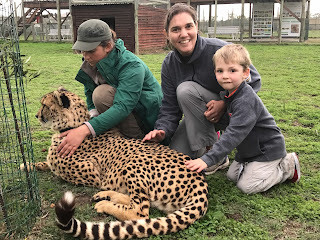 Getting to know the cheetah upclose
Our next destination was the East of South Africa, where we would first stop by Hoedspruit (quick flight from Cape Town), where we spent the night at the Moholo Rehab Center. The kids enjoyed learning about the animals, especially the famous escape artist honey badger. We also did a quick safari in the surroundings, which was a nice intro to our upcoming safari experience.
After one night, we left the rehab center to do a one-day tour of Blyde Canyon (beautiful views! and the opportunity to see South African villages along the way, and a lonely but amazing restaurant by a creek). 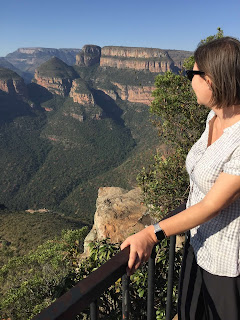 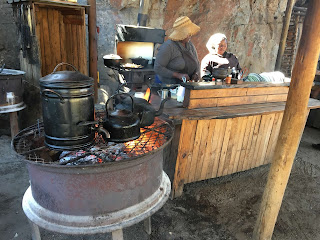 Amazing kitchen in the middle of nowhere with local cuisine 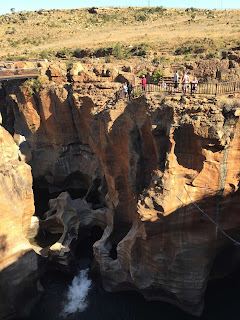 More Blyde Canyon
We finished the day tour at our luxury safari lodge. As I mentioned earlier, it was a beautiful lodge and we felt welcome right away.  The surroundings were beautiful; the food amazing. The guides went out of their ways to find animals for us to see. However, we were not impressed by the landscape and the wildlife in the private reserve. Instead of staying 5 days, we ended up leaving after 3 days and organizing transportation to go into proper Kruger national park. It was a stressful but worthwhile decision. In the park, we got to see the herds of zebras, gazelles, etc... that we had always imagined. We saw a variety of animals (our 4-year old was very well entertained by keeping track of all the animals we were seeing, and the list grew quickly once we entered the park).
The end of our South African trip ended in Johannesburg where we spent our last afternoon. It was meant to be a relaxed afternoon before our next flight to Zimbabwe. We spent it at the botanical gardens, which was a good decision, since we had spent so much time sitting in safari vehicles in the last few days. Click here to get the details of our trip to Zimbabwe.