Back from Costa Rica, Part II

January 05, 2020
After a 7-year break, we went back to Costa Rica during the holiday season and we had a wonderful time. After visiting the Caribbean side in 2012, we decided to try the Pacific coast this time, more precisely the less travelled Osa Peninsula.
We wanted to visit Corcovado which I believe is the biggest and least visited National Park. There are 2 ways to get into the park itself: from Carate in the South (walking 3 miles into it) or from Drake Bay (via boat). We ended splitting and staying at both ends: Luna Lodge in the South and Pirate Cove at Drake Bay.
The logistics of the overall trip was tricky. It’s 6-ish hours drive from San Jose to Carate. On the way there (post red eye), we stopped at Ballena Beach for a night. Ballena Beach is on a lot of guide books, although I personally didn't feel it was worth a stop. But we thought we would need a break by then, so it was as good a place to spend the night as any other. Unfortunately, given the short time we had at Ballena beach, we couldn't even see the famous view and visit the tide pools as low tide didn't align with our schedule. In hindsight, we could have avoided it all and looked into flying through Panama (there is a convenient red eye from Copa to Panama City + morning flight to David; then I think it’s only a few hours drive to Carate.)
Once in Carate though, it was all worth it. The hotel is in the middle of the jungle and we felt that we had been away from busy life for a long time, from the minute we arrived. We enjoyed a variety of activities, from a wildlife safari to horseback riding on the beach, to the occasional swim in the pool, to looking for baby sea turtles hatching from their nests at night (so cute, although the experience was quite eerie). The hotel also offers yoga on a beautiful platform above the trees, although we were too busy to participate.
The highlight was visiting Corcovado from Carate, which involves a really nice - but long- hike and several wildlife encounters. The most memorable one was monkeys chasing after us because our 6-year old was carrying fresh pieces of coconut and the monkeys thought they would just steal them from him. 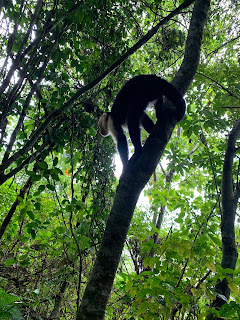 Corcovado National Park
After this wonderful stay in Carate, we had to track back on our steps to go to Drake Bay (driving via Puerto Jimenez) as the 2 places don’t connect through the park. It was a long drive on bumpy roads.  We took advantage of our stop at Puerto Jimenez to take a boat tour in the Golfo Dulce. Keyword there was dolphins! We saw so many dolphins up close. This was fascinating even for us who had recently been in Hawaii and had seen dolphins already. We also got to visit a rescue center (there are a lot of them now in Costa Rica), which was very nice for the kids as well. 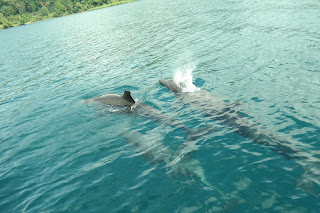 Some of the many dolphins we saw in Golfo Dulce
Once we arrived in Drake Bay, our focus shifted to water activities. We could also have reached Corcovado from Drake Bay (which involves a boat trip), but we ended up not going back. We chose to go snorkeling to Cano Island itself (not great; it wasn’t worth it). We also enjoyed a nice mangrove tour where we saw sloths, and some more relaxing time by the pool. 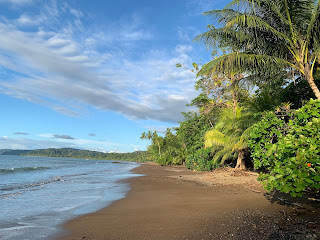 The Beach by Pirate Cove Hotel 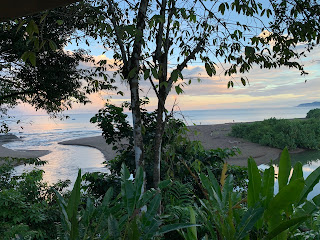 View from Pirate Cove Hotel
Quickly our week was over, and we headed back to San Jose via the crocodile bridge. It's a location where crocodiles love to hang out. It was fun to see these crocodiles although the bridge and its surroundings were quite crowded.
It was overall a good trip and we loved the places where we stayed. But if we had to do it again, we probably would have tried to minimize our time driving. We would have just stayed at Drake Bay, taken the boat to Corcovado and stayed inside the park at Sirena for 1-2 nights. It’s supposed to be a basic lodge, but in the middle of the most beautiful jungle for sure.
That said, if you don’t mind the drive, Luna Lodge is amazing; it’s just very remote in the jungle (which comes with pros and cons).

May 28, 2009
After 10 days traveling in Turkey with our 16-month old son, we found that going to far-away countries with a toddler is not as difficult as many people believe. Yes, we also had our own concerns, and we had set our expectations that we might have a rough time. Yet, we had decided that it would be worth the effort since we were very eager to visit Turkey. As it turns out, most of our concerns weren’t justified, and we found that Daniel had a great time in Turkey. Below are a few things we have learned in our trip. • Jetlag : Interestingly enough, it was easier for Daniel to adjust after this complex trip than after a “simple” journey to Germany. After a 26-hour journey (2 flights and one 2.5 hour car drive) and a jump of 10 time zones, internal rhythm is typically quite upset for everyone, big and small. We flew with the night flight from San Francisco to Frankfurt, so Daniel had a good night of sleep behind him when we landed in Germany. From then, we paced his naps until the follo
7 comments
Read more