October 19, 2009
My in-laws visited us from Germany for about a week, which was great. We hadn't seen them since May, and we enjoyed catching up. Plus, they took good care of Daniel, introducing him to new places, bringing a lot of toys (probably not necessary, though) and teaching him a lot of new German words. They also did the shopping for us and cooked dinner every night... It felt like a vacation!
As a result, we felt well rested over the weekend to do a "big" excursion, to Pinnacles National Monument. The park is well know for the rock formations and cliffs (very popular with climbers) and some caves. We decided to take the short trail (about 1 mile each way) to visit Bear Gulch cave, which is one of the biggest caves in the park. 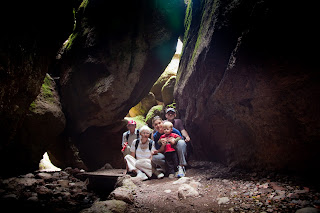 Due to a misunderstanding with my husband, we had forgotten the baby backpack at home. At 21 months, Daniel is actually a good walker, and he didn't seem to mind hiking, even as we climbed up the mountain. The issue, though, is that he loves to explore everything he sees on the way, from stones to flowers to water puddles. A great thing in general, but we were going soooo slow! My husband ended up having to carry him on his shoulders for most of the climb. It was probably a good thing, though, because by the time we arrived in the cave, we needed Daniel to be fit and walk by himself. The cave is very narrow and steep, and it could have made it difficult to carry Daniel.

Daniel did great for the most part: very excited to get into the dark tunnel at first (he is currently fascinated by tunnels). He was also very intrigued by the water falls in the cave. He walked for about 3/4 of the cave and climbed 30-40 steps in the dark without complaining. 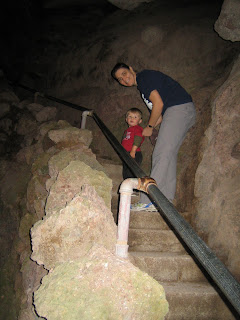 But then, he hit the point where he started to be very uncomfortable in the dark, tired and fussy. These few minutes of meltdown weren't fun. Taking a rest in a corner of the cave with a patch of light helped calm him down. But he didn't want to walk any further in the cave after that, and we had to carry him crying through the exit.

The big reward at the end of the cave is a nice lake surrounded by some of the cliffs. We took a nice break there, having snacks, laying on the grass, watching climbers go up and down, and things went back to normal pretty quickly. Daniel even walked a good part of the way back, until we decided that his constant distractions made us much too slow again... and he finished on my husband's shoulders again. 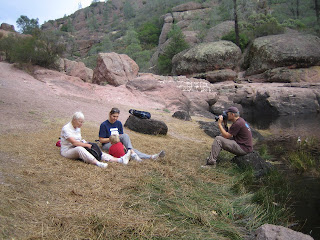 Overall, it was great to have a good excuse to get away from the day-to-day at home. Our weekends are usually very quiet and somewhat repetitive. We enjoy them like this most of the time. But this short trip was a good reminder of things we used to be passionate about, pre-baby: hiking, outdoors, spending time with friends, eating fast-food on the way to the countryside! Part of me had missed all of these things even if I didn't realize this until now.

We are considering joining friends for a weekend in a cabin in the Mount Shasta area in a few weeks. I look forward to having the chance to have a different type of weekend, and to start sharing with Daniel our passion for the outdoors.